This is a picture of my pussy willow tree from a week ago. It has already grown more than this. As you can see here, a lot of new green leaves on it. There is not much else to say other than it is doing very well under the grow light. It is growing so quickly and changing, that I could post an update on it every week, but the problem is I really feel like I need to have something to say in order to justify a post about it, and I’m not going to have enough new information every week in order to do that, but we will see what I’m going to do.

I’m not really sure at this point if this should be classified as an outdoor plant or an indoor plant. It really is an outdoor plant, but it can spend long periods of time indoors if it is grown under the proper conditions, at least that’s what I think, but like I said previously I’m not sure how long it will be able to live indoors, but we will find out. 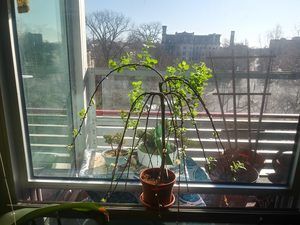 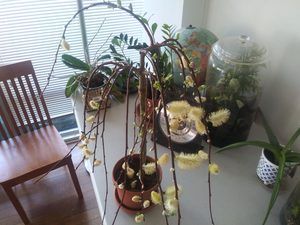 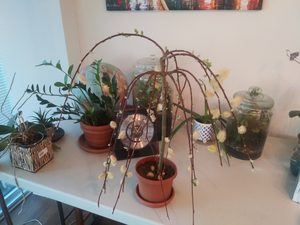 Two weeks ago, I bought this pussy willow tree. I’m going to try to grow it as a bonsai tree. I am worried that it will not make it through the winter because it needs to go through a cold period of time, and Chicago has colder winters than it is accustomed to. Anyway, I’m going to try to keep it indoors until it gets warm enough, and then this summer I’m going to put it on my balcony. I live in an apartment, and unfortunately, I don’t have a garden or backyard.

I have a grow light that it’s growing under, so I’m hoping it will get enough light. It needs at least six hours of light a day, and a lot of water. I also read that they like a lot of humidity, so I’m going to misted every day. Above are my first pictures of it.

There seems to be some disagreement online as to whether or not this tree can survive indoors. Most of the articles that I read say that it cannot live indoors, but I’ve seen many videos online that show people keeping their trees indoors, so I’m kind of confused about this. The other problem is that this type of plant is very susceptible to houseplant pests such as scale, and spider mites, so I’m going to have to be very vigilant and take action at the first sign of trouble. What I have learned is that it’s good to occasionally spray your plants with a mixture of water and alcohol because it’s a good idea to keep the pests at bay if it all possible. Often I have found, that by the time you see them, it’s too late. Don’t wait until your plant looks sick. Occasionally spraying with water-alcohol mixture can be a good way to keep the pests at bay.